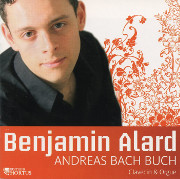 When J. S. Bach was about ten, he was orphaned and went to live with his brother Johann Christoph. This older brother had two music copybooks, one of which bore the name of his son Andreas and it is thus known as the Andreas Bach Buch. The book still exists and has been consulted over the years by such figures as Brahms, Spitta, Schulze, and the editors of many major baroque music editions. Collections such as this were often used for instruction and to recall pieces of interest to the copyist. We are not certain how all of the music in this book came to be written down there, but there are works by Buxtehude, J. S. Bach, Ritter, Marais, and Reincken, among others. Benjamin Alard has chosen some of the works from Johann Christoph’s homemade anthology and uses a 1999 organ of two manuals and pedal with 28 registers built by the Alsatian firm Rémy Mahler and a 2001 Harpsichord* by Philippe Humeau in performing them. BUXTEHUDE: Ciacona in c, BuxWV 159
J. S. BACH: Fantasia in c, BWV 1121 (Adagio); Fantasia & Imitatio in h, BWV 563; Toccata in c, BWV 911
*FISCHER: Praeludium & Ciacona
*RITTER: Suite in f#
POLLAROLO: Capriccio (Allegro)
*MARAIS: Extracts from Suite d’Alcide
*REINCKEN: Ballet (10 variations)