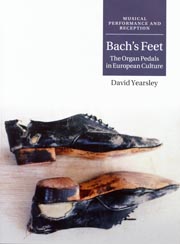 The organist seated at the King of Instruments with thousands of pipes rising all around, hands busy at the manuals and feet patrolling the pedalboard, is a symbol of self-sufficiency yielding musical possibilities beyond all other modes of solo performance. In this book, David Yearsley presents a new interpretation of the significance of the oldest and richest European instrument by investigating the German origins of the uniquely independent use of the feet in organ-playing. Delving into a range of musical, literary, and visual sources, Bach's Feet pursues the cultural importance of this physically demanding art, from the blind German organists of the fifteenth century, through the central contribution of Bach's music and legacy, to the newly pedaling organists of the British Empire and the sinister visions of Nazi propagandists.