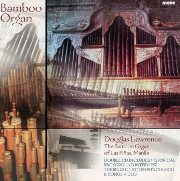 This unique 2-CD set features both a conventional CD of Douglas Lawrence playing the organ and an “extras” CD containing a Quick-Time movie (playable on any Windows or Mac computer) of the world’s only organ built with pipes made of bamboo. Located in the Philippines town of Las Piñas (now a suburb of Manila), the organ was completed in 1821 by the Spanish missionary Fr. Diego Cera. Severely battered by repeated earthquakes as well as typhoons, war, and incompetent repairs, it was restored in 1975. In addition to the movie, the “extras” CD also includes an interview about the history of the organ, a demonstration of the rossignol (bird call) stop, and street noises of the town. The full-color booklet also well illustrates the organ and explains its history and 876 pipes arranged in 21 stops. In the Handel concerto, Bernard Emmer conducts the Manila Chamber Orchestra.

HANDEL: Concerto for Organ and Orchestra in g op. 4, no. 1