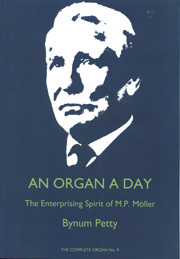 Bynum Petty, An Organ A Day: The Enterprising Spirit of M.P. Möller

First-ever published complete Möller opus list- arranged both chronologically and by region. Mathias Peter Möller was a small man- only 5'8" in height, but he was a giant among his peers. To achieve the title "Dean of Organbuilding," he had extraordinary intuition and acted on it with epic ambition and energy. Not only was he the founder of the world's largest organ company, producing an organ a day, but he also owned automobile companies, hotels, banks, railroads and power companies. He was proud of his Danish heritage and equally proud of his contributions to the business-, cultural- and religious-life of Hagerstown, Maryland. An Organ a Day: The Enterprising Spirit of M.P. Möller tells the story of his life and work. The book is neither a biography of Möller nor is it an exhaustive history of the largest organbuilding company in the world, the scope of this endeavor being intentionally limited to the lifetime of the company's founder. Rather, it is a collection of related essays focusing on significant events in the life of M.P. Möller and his enterprises. Rich with previously undiscovered source material found in the Library and Archives of the Organ Historical Society, the book's 22 appendices contain the first-ever published complete Möller opus list- arranged both chronologically and by region. There are also copies of Möller, Whitelegg, Felgemaker and Roosevelt organ patents; copies of tonal director Richard Whitelegg's pipe scales; stop-lists of famous organs; dozens of factory and family photos and the astonishing diary written by Möller during his European tour of 1921. Over a period of nine years Bynum Petty, Archivist of the Organ Historical Society, has woven together the story of this remarkable man and his wondrous enterprises. Möller's story is a classic in the history of American organbuilding. Paperback 230 pages, 75 illustrations Pendragon Press, 2014