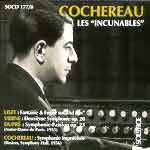 Cochereau’s earliest recordings at Notre Dame Cathedral in Paris and his recording made at Symphony Hall, Boston, on the famous Aeolian-Skinner (originally released as Volume 12 in that firm’s promotional “King of Instruments” series) are combined in a set of two CDs entitled in French, “Les Incunables” (literally, “the earliest artifacts”). The remarkable Notre Dame recordings were made in 1955, the year that Cochereau was appointed titulaire, and are played on the Cavaillé-Coll organ unaltered since Vierne had left it just 18 years earlier. They were originally recorded by Decca in England and released on the L’Oiseau Lyre label.