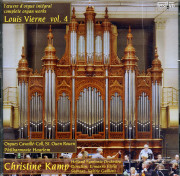 First CD recording of Pièce Symphonique for organ and orchestra!

First CD recording of recently transcribed Improvisation pour grand orgue! Louis Vierne drew inspiration from three movements of in his early organ symphonies: Scherzo from the Second Symphony, Adagio from the Third Symphony and the Final from the First Symphony to orchestrate a new piece for organ and orchestra to perform on his 1927 North American tour. Pièce Symphonique was first performed in Boston at the New England Conservatory with Vierne playing and Wallace Goodrich conducting. The piece is performed here by the Holland Symfonia Orchestra, Ermanno Florio Director in the Haarlem Philharmonie. The hall is home to an 1875 Cavaillé-Coll organ originally built for the Paleis voor Volksvlijt in the same city. That venue was closed, partly due to competition from the new Concertgebouw, and the organ was opened at its present location in 1924. After may travails the organ has been restored and now plays in essentially original condition. The other pieces are performed at St. Ouen in Rouen. Improvisation pour grand orgue was found on a recording among the effects of Madeleine Mallet-Richepin, Vierne’s amanuensis, and transcribed by Jean-Michel Louchart. The score for this piece is available in the sheet music section of this catalog. In addition to other organ pieces on this CD, including the 24 Pièces en style libre, two works for organ and soprano are heard. Ave Verum is Vierne’s only sacred organ and vocal solo composition. Les Angélus is a setting of three poems related to the morning, noon, and night ringing of the Angelus bell. 2-CD Set <VIERNE: