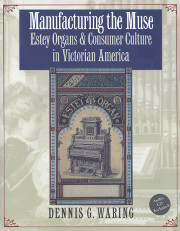 Purchases of American reed organs between 1850 and 1910 exceeded that of pianos by almost two to one. Multiple associations and roles of the reed organ within Victorian life are subtly revealed by the author, who tells the story of this centerpiece of American parlours, churches, and gathering places for nearly a century. It is also the story of venerable New England entrepreneur Jacob Estey, whose industrial standardization of instrument manufacture strongly affected popular culture, social stratification, gender issues, and musical taste. Marketing strategies and the music played on the instrument are examined, and 125 photographs and illustrations show persons, mechanisms, advertising, and examples of the instrument. 356 pages + compact disc

The compact disc features organists E. A. Boadway, Ned Phoenix, Carolyn Halstead, Nancy Reed, and Luella Frechette playing 10 reed organs built 1860-1952 and two pipe organs, one of 3m built in 1906 and the other almagamated from the parts of several Estey organs for a residence. The reed organs vary in size from one manual to two manuals and pedal. Much of the repertoire is taken from music published by the Estey firm, as well as other sources.