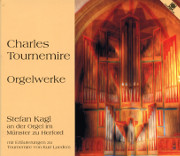 Stefan Kagl plays Tournemire at the organ of Herford Münster, Germany. Choosing Tournemire’s first published organ work, the Sortie of 1894, and two late and large-scaled compositions, Kagl shows several facets of the enigmatic and pivotal composer. Kurt Lueders has written a very fine essay for the CD booklet placing Tournemire’s work in perspective and treating issues raised by the works and also by Tournemire’s mysticism and religious philosophy. Presently arrayed on four manuals and pedal with six divisions and 65 stops, the organ in Herford Munster is based on work completed in 1951 by Förster & Nikolaus and most recently expanded by Jocher & Edouard. Of note is a separate Tuba Unit in “Father Willis” style also to be placed in the church. A very interesting and complete history of the organ’s development is found at http://www.kirchenmusik-im-herforder-muenster.de/Orgeln/orgeln.htm. It is significant that this church places emphasis on its summer series featuring the organ and other players. This emphasis was part of the motivation for the recent modifications. TOURNEMIRE:
Sortie in A, Op 3 (1894)
Sept Choral-Poèmes d’Orgue pour les sept paroles du Xrist, Op. 67 (1935)
Suite èvocatrice pour grand orgue en 5 parties, Op. 74 (1938)