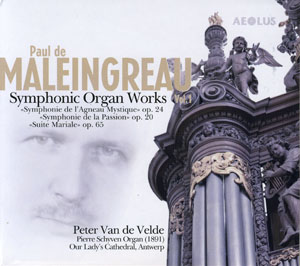 The Schyven firm of Brussels won the contract to build the organ for Our Lady’s Cathedral in Antwerp over the famous Cavaillé-Coll shop because it offered more stops for the budgeted francs. With four manuals and more than 100 ranks, the 1891 Schyven organ remains a well-preserved masterpiece of late 19th-century organbuilding. Maleingreau, inspired by the Flemish Primitive painters and musical themes found in Gregorian chant, wrote and published these three symphonic works between 1920 and 1940. While he wrote a substantial number of smaller, accessible liturgical works, Maleingreau demonstrates demanding, virtuosic and dramatic writing here. Peter Van de Velde, who is only the fifth organist to preside over the Schyven organ, interprets the works to full effect.