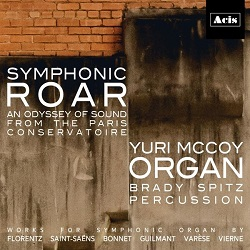 Symphonic Roar: An Odyssey of Sound from the Paris Conservatoire

I have not consciously heard any music by Jean-Louis Florentz. Briefly, he was born near Paris and studied with Olivier Messiaen and Pierre Schaeffer at the Paris Conservatoire. He researched ethnic music in Polynesia, Africa and India and his catalogue includes music for voices, organ, piano, and the orchestra.

There is no doubt that the Poème symphonique pour grande orgue, op.15 La croix du sud is a masterwork. The sub-title refers to the “smallest of the constellations, the Southern Cross.” Even a superficial hearing will reveal the impact of Messiaen. Other influences appear to have been derived from his interest in World Music, Rock (Pink Floyd) and the composer’s love of topography and human beings’ relationship with it. The Poème is episodic, but the liner notes insist that there is an underlying three-part structure derived from Sufi dance tropes. Parts of this work are deeply meditative whilst there are moments of reggae beat and operatic pyrotechnics. It needs to be listened to several times to reveal its full impact.

No such analysis is required with the Allegro vivace from Alexandre Guilmant’s Sonata No. 2 in D Major, op.50. This presents a great contrast between festive music and a slightly more thoughtful middle section and concludes with an exhilarating peroration.

Elfes, the eleventh number from Joseph Bonnet’s Douze pieces nouvelles pour grand orgue, op.7 showcases the flutes and strings. The present recitalist makes more stop changes than normal, to show off the Fisk-Rosales (Edythe Bates Old Grand Organ) voicings. All in all, this is a delightful will-o’-the-wisp evocation and certainly not a “farce” as stated in the text.

Camille Saint-Saëns’ Fantaisie in D flat major, op.101 (1895) was dedicated to the quixotic princess, better recalled as Carmen Sylva. It is written in a highly Romantic style. There are three sections to this massive work: an opening andantino featuring an attractive mélodie, a fughetta and a big, gutsy finale that finally collapses, leaving a quiet epilogue. And no - it is not a fault on the CD. Yuri McCoy deploys the rarely heard Rossignol stop in the closing moments. This is an organ pipe which is partially submerged in water to replicate the sound of the nightingale.


The 24 Pièces de Fantaisie (1925) by Louis Vierne includes some of his finest and most evocative organ music, none more so than the moving Clair de lune inspired by Paul Verlaine’s eponymous poem. This Impressionistic piece is a wonderful example of secular organ music.

Amériques is one of the great exemplars of Modernist music. Its composition was commenced by Edgard Varèse on his arrival in the United States in 1918. It was originally scored for a massive orchestra and showcased a large percussion section, including sirens, a lion’s roar, and a steamboat whistle. The work was completed in 1921 and was revised in 1927 and is a splendid evocation of New York City. The present organist Yuri McCoy explains that he first encountered Amériques in a transcription for four pianists and percussion. His enthusiasm resulted in the present arrangement for large organ with the original array of percussion. No date for this is given.

Varèse wrote that this score was “symbolic of discoveries - new worlds on earth, in the sky, or in the minds of men.” Critics try to apportion influences in this work and Stravinsky’s Rite of Spring is often cited as a common factor but even a superficial hearing reveals a musical imagination exploding far beyond this.  Formally, the structure is episodic, with the sections demonstrating great variety.

The critic Phillip Huscher summed up Varese’s Amériques: It is a “new world symphony - a love song for a wondrous and stimulating new urban environment and a glorious shout of liberation.” I was impressed by this arrangement for organ and percussion. It has all the power and diversity of the original score but something intangible is communicated by The King of Instruments in creating this Urban and sometimes Primitive sound-world.

Two huge organs are used during this recital: the Old Grand Organ at Rice University, Shepherd School of Music, and the South Main Baptist Church organ, both in Houston, Texas. The former was used in the first four pieces and the latter in the last two.

Despite all the positive things about this CD, the presentation leaves much to be desired. For one thing, dates seem to be a problem. Only Elfes by Bonnet is given its composition date in the text and was unable to find when this recording was made. Finally, there is no indication of when Messrs. McCoy and Spitz were born. It is usual to give this information about arrangers in these pages. The packaging was less than good. I tore the flimsy digipack trying to fish out the liner notes.  As for this document, the text is tiny and is printed in a very light, black font. I struggled to read much of it, especially the all-important organ specifications.

Reviewing this CD was thoroughly enjoyable. I relished the playing, the sound of the organs and the power of the recording. It was a privilege to be introduced to this compelling transcription of Edgard Varèse’s Amériques. The impact will remain with me for some time. 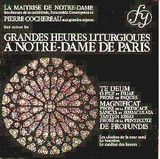 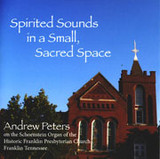 Spirited Sounds from a Schoenstein