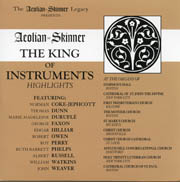 The King of Instruments: Highlights

For this “appetizer” of a highly anticipated series, historic recordings of instruments built by the Æolian-Skinner firm are collected and made available for the first time on compact disc. The “King of Instruments” series, recorded and produced by Æolian-Skinner, features some of the company's most notable instruments played by the organists who were most closely associated with these landmark organs. Recorded between 1953 and 1973, this material is re-mastered by the Vermont Organ Academy, from the original Aeolian-Skinner master tape recordings, which are owned by the Organ Historical Society.


This single CD is sold in a sleeve, not in a usual jewel case.