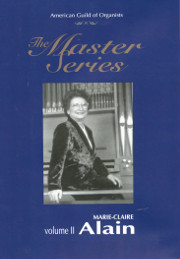 Two masterclasses were captured on video while Marie-Claire Alain was on her 40th anniversary recital tour of the United States in 2002. The two locations used were the Church of the Holy Trinity (Episcopal) in New York City on February 18 and the Bales Organ Recital Hall of the University of Kansas on March 12 through 14. She gives great insights into the music and she lectures as well. Of particular interest are her memories about growing up in a famous musical family. There is also information about her career, the Alain house organ in Switzerland, how she practices, and ideas on teaching.

Marie-Claire Alain is one of the most famous organists of our time, having given over 2,000 concerts as a recitalist or as a soloist with orchestra. Mme. Alain is widely respected as a teacher and is in charge of the "cycle de formation professionelle" for organists at the Conservatoire National de Paris. In France, she is a Commander of the Legion of Honor and a member of the National Order of Merit and National Order of Arts and Letters.

It is compatible with the American TV system only (NTSC) and is not available for the system used in Europe and many other countries (PAL).