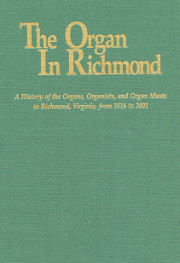 The Organ in Richmond by Donald R. Traser

Rich in history beginning in the Colonial era, Richmond, Virginia, has an organ heritage which this new book fully explores. Two organs known to have arrived in Richmond in 1816/1817, one built by Peter Erben (father of Henry) for St. John’s Church, where Patrick Henry had uttered his most famous words in 1775, and the other built by Bevington in England for Monumental Church, the elegant, octagonal, domed structure designed by Robert Mills, architect of the Washington Monument.

Organs from most major builders and some almost unique ones throughout two centuries are described with photographs, anecdotes, and histories. Henry Erben (1800-1884) of New York built more than a dozen organs for Richmond 1830-1878 including several of 3m.