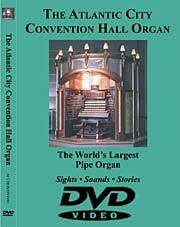 Here are the sights, sounds, and stories of the world’s largest pipe organ – a monumental musical instrument and technical marvel built in the Auditorium of the Convention Hall, Atlantic City, New Jersey, between 1929 and 1932 at the height of the Great Depression. Designed by New Jersey State Senator Emerson L. Richards, this extraordinary instrument has 449 ranks and more than 33,000 pipes. Its eight chambers of pipes are arranged in a "surround-sound" configuration inside one of the largest interior spaces ever created. This video documentary introduces the visionaries who created the organ: Emerson Richards, Seibert Losh (who owned the organbuilding firm Midmer-Losh), and others who influenced the organ. It describes the evolution of the “municipal organ,” the current stabilization and restoration of the Atlantic City Hall and organs, presents a montage of photographs taken during construction of the organ, tours the chambers of the large organ, and reproduces old movie footage of the Hall and home movies of the Ballroom organ (which was built by Kimball), and a separate production on saving old organs with Alan Laufman, Barbara Owen, and Thomas Murray. The video is produced by OHS member Vic Ferrer. DVD only, compatible with U. S. television (NTSC) and will also play on almost all computer DVD players, worldwide.