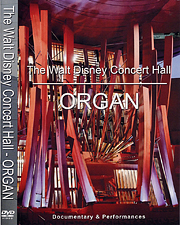 On this 50-minute DVD, stellar performers Olivier Latry, Shin-Young Lee, Frederick Swann, Cherry Rhodes, Christoph Bull, Namhee Han, Wayne Foster, Thomas Mellan, Philip Smith, and John West play the famous organ of 109 ranks built by Manuel Rosales and Caspar von Glatter-Götz in the Walt Disney Concert Hall, Los Angeles, as designed by architect Frank Gehry. The musicians all speak about the organ as well as play it on the DVD, which also contains comments about it from architect Gehry, builders Rosales and Glatter-Götz, and others. An interesting explanation of its design and the building of it, a tour through it, a voicing demonstration, and examples of its use in the community are also parts of the program. Fascinating are the comments by Latry who plays, with Shin-Young Lee, a bit of their transcription of Stravinsky's Rite of Spring. The CD contains full versions of some excerpts heard on the DVD.

Duet Played and Transcribed by Foster and Han
TCHAIKOVSKY: Marche Characteristique and Waltz of the Flowers from The Nutcracker