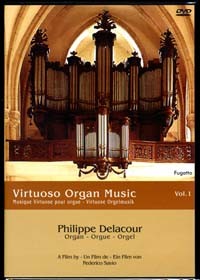 Video: Virtuoso Organ Music Here is the first of what we hope will become a trend: an organ concert on video, well played with excellent visual material and stereo sound (as well as conventional sound). The incredibly virtuosic Philippe Delacour plays two fine organs: the Cavaillé-Coll at Notre-Dame in the French city of Metz, and the pivotal Haerpfer organ built in 1960 at St. Jean-Baptiste at Château-Salins. Both organs are contained in handsome 18th-century cases, and their histories are explained in three languages, including English, in the booklet which accompanies the videotape. The intelligent videography allows us to peruse the building, its windows and contents during musically reflective passages, and puts us right at the console when we want to watch the organist’s prodigious technique, even giving us close-ups of hands on keys and feet on pedals in appropriate passages. 95 minutes,
This video is now re-issued as a DVD. It was formerly published in VHS format as FUG-008.