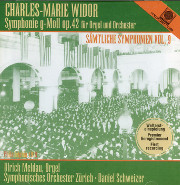 Widor's First Symphony in g for Organ and Orchestra (Op. 42)

FOR ORGAN & ORCHESTRA: Symphony in g: Allegro, Andante, Finale; Allegro vivace (from Sym. 6); FOR ORGAN ALONE: Scherzo "La Chasse;" Three New Pieces (Op. 87): Classique d’hier, Mystique, Classique d’aujourdhui Widor made this "Symphonie pour orgue et orchestre opus 42" by orchestrating three movements from two of his organ symphonies (two movements from Organ Symphony No. 6, Op. 42, and one from No. 2, Op. 13) to perform at the Royal Albert Hall with the London Philharmonic in 1882. The work was played at the Wanamaker store in Philadelphia with the Philadelphia Orchestra in 1919, Stokowski conducting and Charles Courboin playing the organ. In 1920, New Yorker Frank Stewart Adams arranged the Allegro vivace (first movement) from Widor's Organ Symphony No. 5 (also op. 42) for organ and orchestra and conducted it at the Rivoli Theatre with 65 musicians and Firmin Swinnen at the organ. Dupré played Adams' arrangement on the Wanamaker organ at the Philadelphia department store with the Philadelphia Orchestra in 1922. The organ on this recording is the 1988 Kleuker & Steinmeyer in the townhall of Zurich. Ulrich Meldau is the organist with the Zurich Symphony, directed by Daniel Schweizer. The spirited solo organ work, Scherzo "La Chasse," was originally a movement of the Organ Symphony No. 2, Op. 13, but was later replaced by Widor.