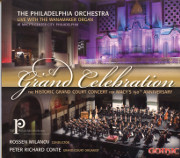 A Grand Celebration: The Philadelphia Orchestra and the Wanamaker Organ

More than 80 years after its composition, the Jongen Symphonie Concertante is heard as performed on the organ for which it was written. In a gala concert, Maestro Rossen Milanov and the Philadelphia Orchestra join Grand Court Organist Peter Richard Conte. Also heard are works by Dupré and Elgar in this long-awaited and much heralded concert of 27 September, 2008. DUPRE: Cortege and Litany, Op. 19, No. 2
JONGEN: Symphonie Concertante, Op. 81
ELGAR: Pomp and Circumstance, Op. 39, No. 1