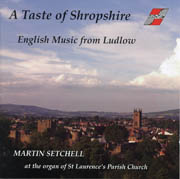 A Taste of Shropshire

In the mood for something tasty?! International concert organist Martin Setchell plays a program of English music on the organ of St. Laurence’s Parish Church in Ludlow, Shropshire. This delightful program of repertoire is sure to conjure up an image of the rolling hills of the English countryside.

"The celebrated New Zealand organist Martin Setchell plays superbly throughout; he is an impeccable stylist, with nimble fingers (and feet) and is clearly having a jolly good time as well. This enjoyable disc – something for that Sullivan collector who already has everything else.."
-Robin Gordon-Powell, for Sir Arthur Sullivan Society magazine
Oliphant Chuckerbutty
Paean - A song of Triumph

Edward Elgar
Pomp and Circumstance No. 4

Charles Burney
Introduction and Voluntary for the Cornet stop