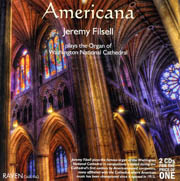 Jeremy Filsell plays the famous organ of the National Cathedral, Washington, DC, in compositions created during the Cathedral’s first century by American-based composers, many affiliated with the Cathedral which has championed American music since it opened in 1912. The organ was originally built in 1937 by E. M. Skinner & Son.