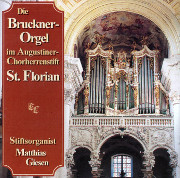 On the occasion of Anton Bruckner’s centenary in 1996 the Upper Austrian organ building firm of Helmut Kögler in St. Florian was commissioned to fully restore the organ at the Abbey of St. Florian, which dates back to 1774 with many changes over the decades. Because of Bruckner’s connection with the organ, it was renovated using valuable extant parts rather than building a new organ. Matthias Giesen, organist on this disc, is the organist at the Abbey.