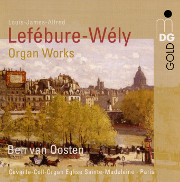 Perhaps the most influential church musician/organist in mid-19th-century France was Louis-James-Alfred Lefébure-Wély who skillfully adapted the popular secular musical styles of the day to church organ music. The result was great appreciation on behalf of most church goers, an exploitation of the new musical resources available on the vanguard organs by Cavaillé-Coll and others, and a backlash from a minority of musicians and public with “better taste.” Astride the malestrom was Cavaillé-Coll, who skillfully remained friendly with both sides, each of which embraced his organs. Cavaillé-Coll was probably involved in placing his lifelong friend Lefébure-Wély, the best known and most celebrated organist in France, as organist of The Madeleine in 1847, where the builder had installed Paris’ first new organ in the symphonic style a year earlier. Then, in 1863, Lefébure-Wély became organist of St-Sulpice in Paris, where Cavaillé-Coll had just completed his largest organ, with 100 stops. On this CD, Ben van Oosten incomparably plays these works on The Madeleine organ, making many of the familiar ones sound new, and finding infinite opportunities to explore his enormous musicality as abetted by awesome technique.