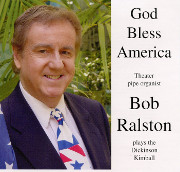 Recorded live on the Dickinson High School Kimball, Bob Ralston, who has made more than 300 albums and is the veteran organist of the Lawrence Welk Show, catches the spirit of American in music.