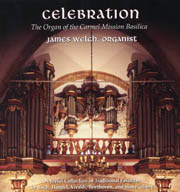 The Carmel Mission Basilica traces its history to 1770 when Fr. Junipero Serra founded the second of 21 California missions. It was raised to Minor Basilica status by John XXIII in 1960 and houses the burial place of Fr. Serra. In 1986, the 3/34 Casavant organ was installed with a versatile tonal design, a remarkable European-styled case and a traditionally placed horizontal trumpet stop. James Welch performs a large selection of well known pieces suitable not only for church occasions, but also for those times when we all enjoy familiar tunes well played.