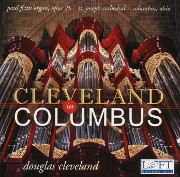 Paul Fritts & Co. Opus 25 in St. Joseph’s Cathedral, Columbus, Ohio is host to Douglas Cleveland on this recording of works well suited to the organ’s massive and intimate timbres. A Cabanilles Batalla shows the reed stops, while diapasons are relished in John Bennett’s opening grave section. In other works the great variety of sound offered in the organ is explored, with the final work, Bach’s Prelude & Fugue in E-Flat, demonstrating not only the massive plenum, but also Cleveland’s contrapuntal mastery and ability to present complexity of both sound and structure clearly.