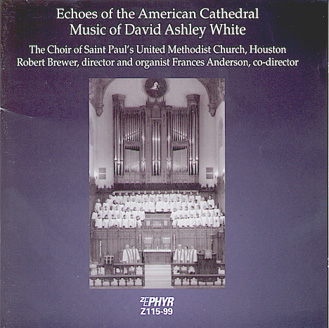 Alleluia; When in Our Music is Glorified;
3 Transfiguration Anthems: O Light of Light; The Lord is King — Psalm 99; This Glimpse of Glory;
3 Anthems on Early American Hymns: I Will Arise (Restoration); Star in the East (fr. The Sacred Harp); Amazing Grace (New Britain);
3 Anthems: The Call; Behold, He Came; Behold Now, Bless the Lord; Cantate Domino;
Mags & Nuncs: St. Paul’s Service; St. Peter’s Service;
7 Hymn Tunes for these texts: Come, Pure Hearts; Without the Fire; There is No Burning; As Panting Deer; Now the Silence, Now the Peace; Sing, My Soul, His Wondrous Love; Grey Ashes; Praise, My Soul, The King of Heaven;
Solo Organ: Reflections on a Tune

American Cathedral Music of David Ashley White Fine anthems, motets, and hymns in the Anglo-American tradition have been composed over many years by White, who is professor of composition and dean of the Moores School of Music at the University of Houston. The works are performed by the excellent choir of St. Paul’s United Methodist Church, Houston, directed by Robert Brewer, organist/choirmaster and Frances Anderson, co-director. The choir is accompanied on the 1981-96 Schantz of 80 ranks. The solo organ work is played by Brewer on the Fisk organ at Palmer Memorial Episcopal Church, for which it was composed.