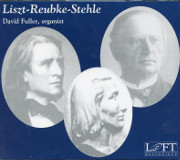 Writes Fanfare magazine, March-April, 2001: ". . . a recording that, by any standard, is superb . . . David Fuller's account of the Liszt Fantasy and Fugue has an awesome power. . . The wide spectrum of tone colors available from this Fisk is evident in the quiet sections of the Prelude, and they are put to very good use in the massive Sonata of Julius Reubke . . . Cast in three movements, it calls for a vast array of sonorities that the Fisk organ fully conveys; those cascading passages that seem to take us through so many keys in the glorious final Allegro have never sounded so inspired. David Fuller's performance is among the finest I have encountered on disc: His fingers and feet are nimble and accurate, the virtuoso passages dispatched with utter brilliance. . . a towering achievement. Johann Stehle belongs to the following generation, having lived well into the 20th century. He completed Saul in 1877, the composer taking the story from the Bible as related in the First Book of Samuel. The work is so descriptive that the listener should be well aware of the events that take place to fully understand the music. Indeed, itis like an early film score without the film. . . The performance from Fuller is an ideal mixture of subtlety and red-blooded impact." David Fuller’s brilliant and fiery playing, combined with the intellectual depth of a revered musical scholar, creates remarkable performances of these 19th-century masterpieces. Saul, the work by Johann Gustave Eduard Stehl (1839-1915), is described as the first symphonic poem for organ. Inspired by the Liszt “Ad nos,” the work is modeled after the Reubke psalm. The 1990 Fisk op. 95 at the State University of New York, Buffalo, of 3m and 55 ranks, features unusual abilities to convincingly provide both Romantic and Classical registrations, including even a foot pedal to convert the Great mixture from progressive Romantic with a rising dynamic characteristic to the more balanced, breaking mixture typical of a Baroque plenum. At any rate, the organ sounds entirely convincing in these cornerstones of the Romantic repertoire. SPECIAL 2-CD set