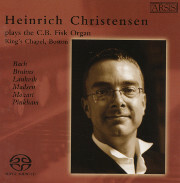 The Charles Fisk organ at King’s Chapel in Boston was built in 1964 very shortly after Daniel Pinkham began his 42-year tenure as organist. For the last two years of that tenure, Heinrich Christensen was his assistant and succeeded him as music director in 2000. A native of Denmark, he studied at the Royal Conservatory in Århus, with Olivier Latry in Paris, and James David Christie in Boston. BRUHNS: Praeludium in E BACH: Sonata in C, BWV 529; Toccata & Fugue in d Dorian, BWV 538 PINKHAM: A Flourish, A Vision, and a Commentary JESPER MADSEN: Preludes on 3 Danish Chorale Tunes JON LAUKVIK: Suite MOZART: Andante, KV 616