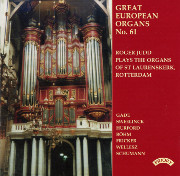 Roger Judd plays the Organs of St. Laurenskerk, Rotterdam St. Laurens Church in Rotterdam, Holland was completed in 1525, and only the walls and tower remained after a German air raid in 1940. The church was rebuilt 1947-1968. Three new, contrasting organs were built by the Danish firm Marcussen & Søn, under Sybrand and Jürgen Zachariassen. The massive Hoofdorgel (West-End organ) is housed in a new case, approximately eight stories tall! With over 7,000 pipes on this mechanical action instrument, the presence of a Barker lever is no surprise. The presence of Spanish trumpets and classical and romantic French voices offer a wide range of possibilities to the performer. The three manual transept organ, housed in a 16th Century Dutch case, was the first to be completed after the rebuilding of the church (1959). Although the space has been altered since the completion of the instrument, none of the voicing has been adjusted; The sound of the organ is enhanced in the new space. The modest Choir Organ is housed in an 18th century case. Its eight stops are playable on the single manual, and must be coupled in order for the pedal to sound. Roger Judd of St. George’s Chapel, Windsor Castle, is an active musician and teacher in Great Britain. Neils Gade Festival chorale prelude on Lobet den Herren Played on the West-End Organ Jan Pieterszoon Sweelinck Variations on Onder een linde groen Played on the Choir Organ Peter Hurford Five Short Chorale PreludesWem in LeidenstagenOn a Rouen Church melodySong 34Schmücke dichGott des Himmels Played on the Transept Organ Georg Böhm Præludium in D minor Played on the Transept Organ Egon Wellesz Partita in honorem J. S. BachFantasiaGigueAriaSarabandeFinale Played on the West-End Organ Peter Racine Fricker Pastorale Played on the West-End Organ Robert Schumann Six Fugues on BACH Op. 60 Played on the West-End Organ 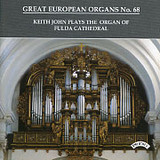 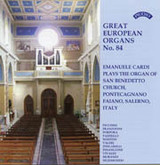 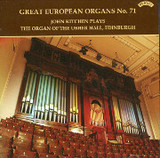 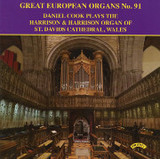