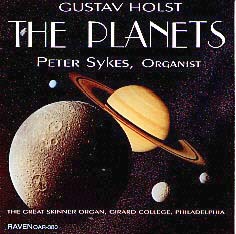 Peter Sykes transcribes this 20th-century orchestral masterpiece for, and plays it on, the 1933 Skinner organ of 100+ ranks at Girard College, Philadelphia. The organ remains as the last large organ E. M. Skinner designed and built for great acoustics before he left Aeolian-Skinner.

Writes Michael Alan Fox in The Absolute Sound, "The organ record of the year, maybe the most interesting of the last several."

Writes David Bond in the The American Record Guide, "Sykes has made the impossible possible. This transcription is by far the most satisfying and persuasive I have ever heard. His performance rivals many of the orchestral versions available today with its attention to color, drama, and sweep. At times, its better! Sykes uses the [Girard Skinner] better than any other recording I have heard of it. Superb engineering . . . the hair on my arms was on end most of the time!"

Writes Phil Muse in disCDigest, "This is a very attractive-sounding recording, capturing . . . a great organ in a beautifully clear and natural perspective."

Gustav Holst (arranged by Eric Thiman), "Jupiter' Theme" ( "I vow to thee, my country") from "The Planets" Suite