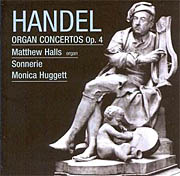 These enormously popular works for organ and orchestra were sometimes interspersed between the sections of an opera or oratorio, and so infected society that they were played in homes and taverns as well. He composed two sets of six concerti each, op. 4 and op. 7, as well as the stand alone Concerto No. 13. Here, the six concerti of Op. 4 are performed by the young, virtuostic, Matthew Halls with the ensemble Sonnerie which is directed by Monica Huggett. This is a delightful chamber version, using replica baroque instruments and usually one on a part, a small chamber organ, recreating an experience much like the way these works were heard outside the theatre.