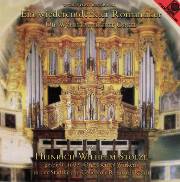 This CD unveils such a treasury of Romantic German organ music that it is hard to believe it lay completely forgotten for more than a century. Stolze studied with Johann Christian Kittel who had been a pupil of Bach and then others. He writes, “Thanks to my father’s duties as choir master and organist at the Predigerkirche, I really grew up at the organ.” In 1823 he became town and palace organist in Celle where he remained distinguished as a musician for the rest of his life. Of this work, he writes, “This fourth and last part of my practical school for organ, op. 58, is intended only for the more advanced . . . There is scarcely any need to mention that the idea is taken from Seb. Bach’s Well-Tempered Clavier; here, however, the preludes and the fugues are more related to form a while, so that the preludes are not complete in themselves.” The 24 pieces in each key are played on 2 CDs by Reinhard Kluth on the 3-66 organ reconstructed in 1999 in the “Bach temperament” of John Barnes at the Stadtkirche in Celle.