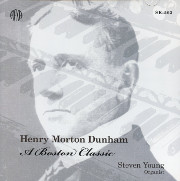 Student of George Whiting and John Knowles Paine, Henry Morton Dunham taught at the New England Conservatory of Music for nearly 50 years, numbering Wallace Goodrich and Everett Truette among his own students. Dunham was also a composer for solo organ and for organ and orchestra. He served several Boston area churches as organist and was respected as a concert performer. He performed at the St. Louis Exposition in 1904 and Guilmant’s recitals there may have been Dunham’s inspiration to edit works by French composers. With musical forbears such as Whiting and Paine and their teachers W. T. Best and Rheinberger, Dunham’s compositions are influenced by classical formalism and German Romanticism, while he contributed an American viewpoint in his works and earned the respect of colleagues both here and abroad. Steven Young is Associate Professor of Music and Director of Choral Activities at Bridgewater State College, Bridgewater, Massachusetts. He performs these works of Dunham on the 1863 Walcker/1947 Aeolian-Skinner Organ at the Methuen Memorial Music Hall. Dunham himself performed on the Walcker installation of this organ. DUNHAM: Second Sonata in f, Opus 16 Andante in A-flat Passacaglia in g, Opus 23 Fantasia and Fugue n d, Opus 19 Chorale Prelude on Schmücke dich, O liebe Seele, Opus 20, No. 2 Fantasia in c, Opus 21