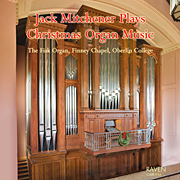 Jack Mitchener plays Christmas organ music on the 75-rank pipe organ built by C. B. Fisk as Op. 116 in 2001 at Finney Chapel, Oberlin College Conservatory of Music, Oberlin, Ohio. The large Fisk organ in Finney Chapel is designed in the style of instruments built in France in the late nineteenth century by the celebrated Aristide Cavaillé-Coll. It is a magnificent instrument that affords exceptional variety in registration and dynamics — the latter due to the expressive Positif and Récit divisions. The French character of the organ leans quite obviously in the direction of French repertoire, yet the eclecticism of this instrument makes it suitable for a host of other styles. Even though the Finney Fisk is decidedly nineteenth-century in nature, the French noëls from the eighteenth century by Balbastre and Daquin work exceedingly well — the reeds and mutations bring the works to life. And the simple setting of In dulci jubilo (In sweet joy) of Bach is astonishingly clear with the Principal stops from the Positif and the German-style Violone 16’ in the Pedal. The delightful preludes of Manz and Near are beautiful examples of American repertoire for Advent. The Dupré setting of In dulci jubilo is probably the most popular of his 79 Chorales in Op. 28, and Es ist ein Ros’ entsprungen (“Lo, how a Rose e’er blooming”) of Brahms is a charming and gentle Christmas gem. The Vaughan Williams is a transcription of the ravishing Fantasia on Greensleeves. In this piece, you will hear some of the organ’s most beautiful solo stops. T. Tertius Noble’s arrangement of the Cantique de Noël (“O Holy Night”) by Adolphe Adam also shows the enormous dynamic range of the Fisk organ. The Pastorale Gesù Bambino is among the most popular Christmas pieces in the classical repertoire and appears in countless arrangements. The Hautbois of the Récit and Flûte harmonique of the Grand Orgue are featured prominently in this piece. The Thiman setting of Adeste fideles (“O come, all ye faithful”) is a rousing postlude for a joyous Christmas celebration and in it the full resources of the organ are used. Despite its great success with the aforementioned repertoire, the Finney Fisk comes into its own in the French romantic style. The registrations suggested by the composers were followed and worked with very little adjustment. The Guilmant Noël polonais (“Infant holy, infant lowly”) is a set of variations on the popular Polish carol that demonstrates the gamut of possibilities in registration on the instrument – from silvery strings to brilliant and resounding reeds. The Duruflé Prélude sur l’Introït de l’Éphiphanie is a liturgical piece that shows the contrast between the Récit mixture chorus (plenum) and the Positif Trompette. In the colorful Noël from the Byzantine Sketches by Mulet, the mutations from the Positif contrast with various flutes and strings from throughout the organ. The concluding work is a fanciful and exciting romp through numerous French noëls. The two tunes that most listeners will recognize are Adeste fideles (“O come, all ye faithful”) that is heard on the Voix humaine from the Récit division in the middle section and the refrain from “Angels we have heard on high” (the French noël Les anges dans nos campagnes) that appears in the pedal reeds in the closing section. Throughout the piece Gigout follows standard improvisational practice by combining various themes. The carillon-like effect in the manuals in the opening and closing sections gives symmetry to the piece and to the recording that began with the ringing of bells. The American organ builder Ernest M. Skinner often remarked that the room is the most important stop on an organ. As imposing a space as Finney Chapel is, it does not have live acoustics. As a remedy, recording engineer Edward Kelly has added subtle reverberation that provides warmth and beauty. May the glorious sounds of the Fisk organ in Finney Chapel fill your hearts with the spirit of Christmas – Joyeux Noël! 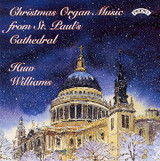 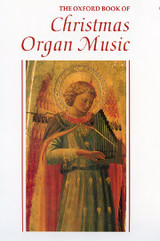