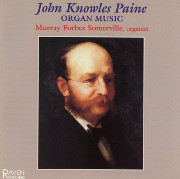 John Knowles Paine (b. 1839 Portland, Maine - d.1906), the first university organist and first professor of music at Harvard, studied in Germany and first made his mark as an organist. Five of the works on this CD were not published until 1996 (sheet music available on this website). Murray Forbes Somerville, the present Harvard organist, plays these wonderful American pieces on three fascinating organs, two played by Paine: the 1863 E. & G. G. Hook at Immaculate Conception Church, Boston (perhaps America’s greatest organ, last recorded almost 20 years ago); 1863 E. F. Walcker now at Methuen Memorial Music Hall and rebuilt by Aeolian-Skinner in 1947; and the 1997 Lynn Dobson op. 69 at Pakachoag Church, Auburn, Mass. This CD was released in May, 1999, at Boston's Immaculate Conception Church during an organ concert, the first heard there in nearly two decades.


GREAT REVIEWS!
Writes the American Record Guide of March-April, 2000: ". . . Somerville's playing is incomparable. He has just the right proportions of dramatic flair, delicate line, and saucy fun that allow these works to come alive and sparkle. I cannot imagine better . . . His choice of instruments is also inspired . . . As usual, Raven's engineering is superb. This is a 'must have' for lovers of organ music."

Writes The Organ of Spring, 2000, ". . . I hope that this disc will help to bring Paine the fame he justly deserves."

The Complete John Cage Edition 47: The Works for Organ