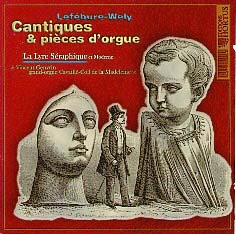 Alfred Lefébure-Wely (1817-1869) led the new style of church music and organs in Paris, paving the way for Cavaillé-Coll to build his important large organs at mid-century. From his influential positions as organist of La Madeleine (1847-57) and St-Suplice (from 1863), he introduced to the church new music based on popular idioms, such as the can-can, as well as sacred compositions. These brilliant CDs introduce us to Lefébure’s music in the context for which it was composed. This music set the path for Franck and Widor and explored newly symphonic voices in the organ. The very talented Vincent Genvrin plays the Cavaillé-Coll organs at St-Sulpice and La Madeleine, with soloists and choirs. Lefébure-Wely Songs & Pieces for Organ performed at La Madeleine, including secular and religious works, and a ‘’composed’’ thunderstorm.