During the years 1895-96, Boëllmann composed 100 short and easy works for organ or harmonium under this title and consisting of fifty Versets and ten of each: Entrées, Offertoires, Elévations, Communions, and Sorties. The first edition appeared in two volumes, op. 29 and op. 30, with half of each type of work in each. In this new urtext edition edited by Helga Schauerte-Maubouet, all of the entrées and 10 offertoires are in Vol. 3, Part 1; all of the elévations, communions, and sorties are in Part 2, and all 50 Versets are in Part 3, arranged by key. Other publishers have drawn upon this rich resource to publish single pieces, renamed, or to assemble several pieces as a suite. This volume contains 10 entrées and 10 offertoires, op. 29 & 30 (plus arrangements with pedal of Offertoires op. 29, nos. 1 & 2), Offertoire funèbre (sans opus), 130 pages, Bärenreiter editon. 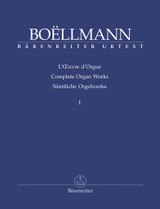 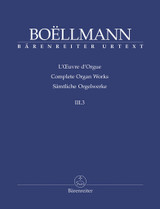 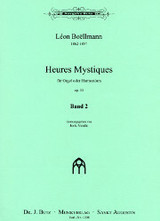