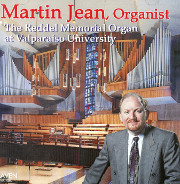 WM. BOLCOM: Gospel Preludes, Book 4 Sometimes I Feel Like a Motherless Child, Sweet Hour of Prayer; Free Fantasia on O Zion Haste and How Firm a Foundation BACH: Prelude & Fugue in E Minor, BWV 548 BRAHMS: Fugue in A-flat Minor PACHELBEL: Ciaconna in F minor LISZT: Fantasia & Fugue on Ad nos, ad salutarem undam In the largest collegiate chapel in the world, Martin Jean plays the newly rebuilt and enlarged, 102-rank, Reddel Memorial Organ. The famous instrument was originally built with 64 ranks in 1959 by the Schlicker Organ Co. to a design of Paul Bunjes. The enlargement, rebuilding, and tonal revisions were completed by the Dobson Organ Co. under the direction of John Panning. REVIEWS: From The Organ, November, 2000: "The Chapel of Valparaiso University, Indiana, is said to be the largest collegiate church in the world, seating some 3000 people. The Chapel was built in 1959, the organ designed by Paul Bunjes and built by Herman Schlicker of New York. After further additions in 1962 and 1978, the instrument was fully rebuilt in 1996 by Dobson Pipe Organs who added some 24 new stops. The specification is very interesting as several of the divisions are divided, the whole organ cantilevered out from the west wall, divided round the stained glass window, the pipework exposed à la Holtkamp. Starting with three jazzy Gospel Preludes by William Bolcom, Mr Jean moves onto Bach's Prelude & Fugue in e BWV 548 (The Wedge) presenting an exciting performance at quite a speed, not though as a demonstration of the player's virtuosity. The writing, as nearly always, works superbly, the quality of the instrument being ably demonstrated. After Brahms and Pachelbel, to finish with we have another exciting performance, Liszt's Fantasia über Ad nos, ad salutarem undam, always a severe test of organ and player. From the menacing opening to some spine-tingling trumpet fanfares through to the final triumphal bars, this is in excellent performance, again well demonstrating that this Schlicker/Dobson organ is an excellent instrument – and what's more, it speaks out into a resonant acoustic, quite a rarity in American churches. Amongst all the CDs I have of organs in the States, this is probably the best, both for instrument and performance: highly recommended." 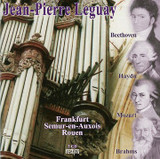