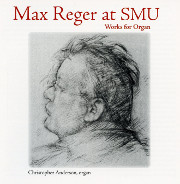 "...This recording will prove invaluable to anyone interested in the effective performance of Reger," says James Hildreth of The American Organist.* Christopher Anderson plays both the 3-51 Fisk organ, Opus 101 in Caruth Auditorium and the 3-71 Aeolian-Skinner/Schudi/Dupont organ in Perkins Chapel at Southern Methodist University, performing works of Max Reger. The works played on the chapel organ show a quiet and contemplative side of the composer quite different from the massive, tortuous works played on the Fisk organ. Dr. Anderson’s well-written essay in the CD booklet provides much material for thought in encountering Reger’s difficult and complex writing, placing the works in the context of Reger’s own life and also of the musical evolution of his time. REGER: Fantasy & Fugue in d, Op. 135b From 52 Easy Chorales Preludes on the Most Common Potestant Chorales, Op. 67: Aus tiefer not schrei ich zu dir From Twelve Pieces, Op. 59: Pastorale Symphonic Fantasy & Fugue, Op. 57 (“Inferno”) *The American Organist, May 2010, page 67