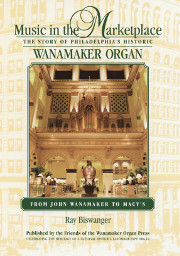 Music in the Marketplace: The Wanamaker Organ

Author Ray Biswanger now tells the complete story of the colossal pipe organ and the fabled Philadelphia retail palace that has been its showcase for 90 years. The Reigning Monarch of All Instruments was built in California and exhibited at the 1904 St. Louis World’s Fair as the world’s largest pipe organ. In 1909, millionaire merchants John and Rodman Wanamaker made it the centerpiece of their magnificent new store. During the next 18 years, dozens of artisans enlarged the organ as a virtual symphony orchestra in pipes. Wanamaker’s presented its unique cultural achievement in brilliant concerts featuring Leopold Stokowski, the Philadelphia Orchestra, and the world’s foremost musicians. This sumptuous book contains 270 illustrations in 18 chapters, 5 appendices, specifications, and the current console layout. There is much never-before-published material from unsealed archives of the Wanamaker Store, the Henry Willis organ factory, and other sources that reveal the complete, personal story behind the creation of one of the great organs, maybe the world’s largest. 302 pages, large format, hardbound, published by the Friends of the Wanamaker Organ. Now in stock for immediate delivery!