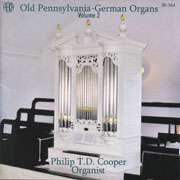 LIMITED QUANTITIES AVAILALBE! Continuing his explorations of the Pennsylvania-German school of organbuilding, Philip T. D. Cooper visits an 1802 David Tannenberg organ still found in its original location in Madison, Virginia’s Hebron Lutheran Church, two bureau organs of 1804 and 1805 by Conrad Doll located in The Lancaster (Pennsylvania) Heritage Center and a private residence, a larger six-stop instrument by Doll, built in 1807 for Peace Church, Camp Hill, Pennsylvania, and an 1865 George Krauss organ located in Huff’s Union Church, Huff Church, Pennsylvania. Cooper’s extensive notes on the organs and the reasons for the use of certain literature provide interesting reading. The recording gives us the opportunity to hear sounds which would have been typical in and around 18th-century Dresden, but which are no longer preserved there. Instead, due to the migration of such builders as Johann Gotlob Clemm and David Tannenberg, the tradition is preserved in America today. Musical selections are from many sources, some familiar, such as works by Pachelbel, Bach, Krebs, Rathgeber, Kauffmann, and Buttstedt and others by anonymous writers and found in tune books preserved in the areas visited.