Vol. II “Historic Organs of Oaxaca, México” (Órganos Históricos de Oaxaca, México) The state of Oaxaca, Mexico houses one of the world´s most extraordinary collections of historic pipe organs. Sixty-nine instruments built between 1686 and 1891 remain today as evidence of Oaxaca´s glorious musical past; the seven organs that are still playable have been featured in the eight International Organ and Early Music Festivals sponsored by the Instituto de Órganos Históricos de Oaxaca (IOHIO). IOHIO is now releasing recordings of the concerts given during these festivals as part of the series, “Historic Organs of Oaxaca, Mexico”. This series brings the sound of these remarkable 18th century instruments to the general public, not only demonstrating the unique and brilliant character of the instruments but also providing exciting performances by distinguished organists. The 8´ organ of the Oaxaca Cathedral (built 1712, restored 1996), which is one of the largest and most versatile of the Oaxacan organs, is featured in the second volume of the series. This concert by Mexican artists JOSÉ SUÁREZ, organ, and HORACIO FRANCO, recorder, presents works that demonstrate the wide capabilities of this organ. The CD includes a 20-page booklet in English and Spanish with an essay by Barbara Owen about the Oaxacan organs in general and one by Cicely Winter about the specific organ itself. [total playing time 59:13] SELMA Y SALAVERDE: Sonata for recorder and continuo ANONYMOUS 18th CENTURY: Sonata in d minor for recorder and continuo (from a manuscript in the Archives of the Mexico City Cathedral) J. S. BACH: Sonata in e minor, BWV 1023 G. B. FONTANA: Second sonata for recorder and continuo ANONYMOUS 18th CENTURY: Sonata in Eb major (from a manuscript in the Archives of the Mexico City Cathedral) ANONIMOUS 18th CENTURY: Tiento de batalla de octavo tono J. S. BACH: Sonata in d minor, BWV 997 VIVALDI: Concerto in g minor, Op. 4 No. 6, Allegro 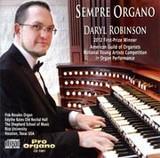