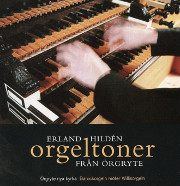 One of the world's unique organ situations exits at the resonant Ögryte New Church (built ca. 1880) in Göteborg, Sweden: the 3m Henry Willis organ built in London for St. Stephen's Church, Hampstead, England, is almost entirely intact and relocated to a large transept gallery of the Ögryte Church in 1998; in the rear gallery is an astonishingly successful copy of the 3m organ completed in 1692 by Arp Schnitger for the Jacobi Church in Hamburg, Germany. The handsome church was entirely restored, architecturally and visually, in the mid-1990s to receive the organs, with materials selected to maximize the already good acoustics. The "Schnitger" organ is the creation of a team of organbuilders, scientists, musicologists, and craftsmen of the Göteborg Organ Art Center (Go-Art) at Göteborg University, where the Willis had previously existed for a few years as a teaching instrument while a new organ in French Romantic style was being built.

Erland Hildén, the organist of the Örgryte New Church, plays a wide ranging program to demonstrate both organs.