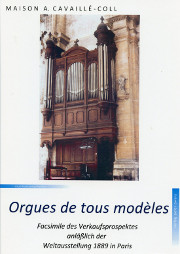 For the 1889 Exposition Universelle (Paris World’s Fair), Cavaillé-Coll prepared as a hand-out to potential customers a handsome catalog of ten spécimens d’orgues (model organs) of up to 30 stops as well as 28 additional pages devoted to stoplists and drawings of organs built and proposed for such places as Albert Hall in Sheffield, England and St. Peter’s Basilica in Rome, testimonials, a history of the firm, and a list of exported organs (including a tantalizing dozen to “Amerique,” one each to “Louisiane” and “New-Orléans,” and 24 to Central and South American countries). Of course, the text is in French. The publisher of this facsimile has added a brief description of the Fair in English, color pictures and stoplists of seven extant examples identical or similar to the model organs, a reprint of an article in English about the Fair by Schuyler van Rensselaer as published in 1889 in the New York quarterly, The Century. 87 pages, hardbound