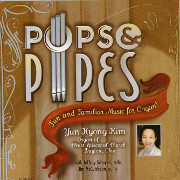 The resonant space of Christ Episcopal Church, Dayton, Ohio, contains a 3m organ rebuilt in 2004 by the Muller Organ Co of Croton, Ohio, and containing many pipes of the congregation’s distinguished series of organs by Wirsching (1890), Hutchings-Votey (ca. 1900), and Möller (1923), previously rebuilt by Tellers (1967). Yun Kyong Kim immigrated from Korea in 1984 and has received undergraduate and graduate degrees in organ from the University of Washington and Indiana University, and placed in the 2000 AGO National Competition.