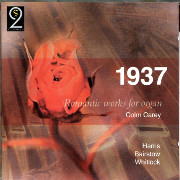 In 1937, British composers Percy Whitlock published and Edward Bairstow composed the works recorded here. In the same year, a new royal family moved into Windsor Castle where Sir William Harris was organist of St. George’s Chapel and piano teacher to two princesses: Elizabeth, who became the reigning Queen, gained the degree of Bachelor of Music under his tutelage. He composed this Flourish for the annual Garter service of 1947. Colm Carey plays the 3-55 Létourneau op. 68 at the Church of the Ascension and St. Agnes, Washington, DC.