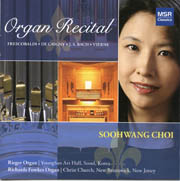 Korean organist, Soohwang Choi, is heard in an attractive recital, given on two very different instruments. On the Rieger, she presents repertoire in a wide range of styles, beginning with Toccatas by Frescobaldi, the first a dissonance and suspension toccata with unexpected chords and syncopations and a second of a more conventional nature. Also featured is a work by Grigny featuring uneven rhythms and ornamentation, followed by Vierne's highly chromatic Symphony No. 1: A work which uses all the resources of the instrument. On the Richard Fowkes organ, Choi gives an eloquent account of J.S. Bach's Trio Sonata No. 2 in c minor, which demands as much from the pedals as from the manuals. Soohwang Choi maintains an active career as an organist, and has performed in the Us, Italy, Germany, Japan, and Korea. As a recording artist, she has released several live organ concerts on CD, and based on her doctoral research has published several academic articles on a range of organ repertoire.