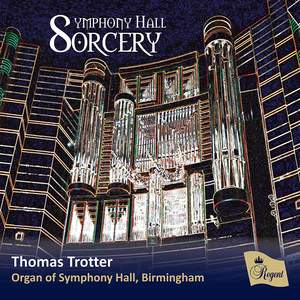 Organ music magical,symphonic, dancing, and jazzy from one of the world’s great wizards of the organ, Thomas Trotter, performed on the magnificent 2002 Klais organ in Birmingham’s Symphony Hall.

An unashamedly entertaining selection of old and new, with well-loved pieces from Saint-Saëns and Widor to Thomas Trotter’s own new transcription of Dukas’s ‘The Sorcerer’s Apprentice’. Two sets of dances - one from the 16th-century Susato and the other from the 20th-century John Gardner are a riot of rhythmic energy and expressive colour.

Derek Bourgeois’s‘Serenade’ (written for the composer’s own wedding), and Zsolt Gárdonyi’s‘Mozart Changes’ are engagingly-quirky and unusual sorbets, and the programme ends with a breath-taking display of dazzling virtuosity in the ‘Sweelinck Variations’ by the Canadian composer, Rachel Laurin, commissioned for Thomas Trotter’s 800th recital as Birmingham City Organist in 2019. These explore every aspect of organ technique including a jaw-dropping pedal cadenza.

Thomas Trotter is one of Britain’s most widely admired musicians. The excellence of his musicianship is reflected internationally in his musical partnerships. He won the Royal Philharmonic Society award for Best Instrumentalist in 2002, and in 2012 he was named International Performer of the Year by the New York Chapter of the American Guild of Organists. In 2016 he was awarded the Medal of the Royal College of Organists. He has received Honorary Doctorates from both Birmingham City University and Birmingham University, and in 2020 he was awarded the Queen’s Medal for Music.

Earlier in his career Thomas Trotter was Organ Scholar at King’s College, Cambridge, winning the First Prize at the St Albans International Organ Competition in his final year. He was appointed Birmingham City Organist in 1983 in succession to Sir George Thalben-Ball, and gives regular recitals on the Hill/Mander organ of Town Hall and the 2002 Klais instrument in Symphony Hall.

Alongside his regular recitals in Birmingham, Thomas Trotter tours on four continents and plays at many international festivals such as Bath, Salzburg, and the BBC Proms. His recordings appear on the Decca, Hyperion, Chandos, King’s College, and Regent labels.

Saint-Saëns: Fantaisie No. 1 for organ in E flat major 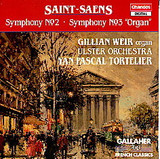 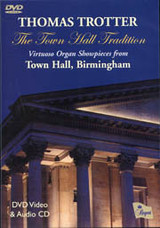