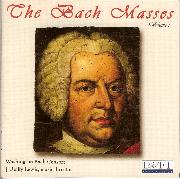 FIRST AMERICAN CD RECORDING! The success of Bach's B-minor Mass has obscured a number of his shorter masterpieces of the same genre. Written in the 1730s (when Bach was in his 40s), these masses—which consist only of a Kyrie and Gloria setting—could be performed in both Catholic and Lutheran liturgies. Sometimes misleadingly called "The Lutheran Masses," Bach used them to gain recognition from the Catholic court of Dresden, which bestowed upon him the title "Electoral Saxon and Royal Polish Court Compositeur." Later he was to take one of these masses and expand it into the full B-minor Mass so popular today. The Washington Bach Consort, directed by J. Reilly Lewis, is one of America's leading Bach ensembles, having recently performed the entire 5-year cycle of Bach cantatas. In this first volume of the complete Bach masses, they explore some of the B-minor Mass's lesser-known, but equally interesting, companions. Program notes by eminent Bach scholar Christoph Wolff. Mass in F major, BWV 233 Kyrie-Christe, Du Lamm Gottes, in F major, BWV 233a Mass in G minor, BWV 235