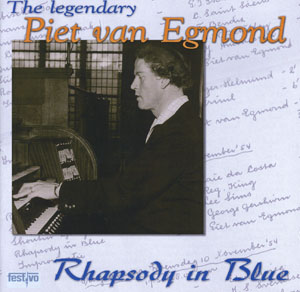 From 1948 to 1967 Piet van Egmond broadcast weekly Popular Organ Recitals from various venues. Beginning in 1953 these programs originated in the Prinsessekerk in Amsterdam, home to a 3-manual romantic organ built by G. F. Steinmeyer & Co. of Oettingen, Germany. The organ has since been destroyed but, as built in 1924, it had three swell boxes, three tremolos, a Rollschweller and a plethora of octave and sub-octave couplers to delight the player. This archival recording displays the engaging repertory and playing which made Van Egmond’s weekly broadcasts so popular. The programs included many arrangements of piano, orchestral and salon pieces and often an improvisation. On this recording, Gershwin’s Rhapsody in Blue has been reconstructed to fine result from recordings which Van Egmond himself made at home when the program was broadcast. Transcription lovers will enjoy the broad range of this nicely produced disc from Adolphe Adam to Fritz Kreisler and beyond. Adam: Ouverture 'Si j'étais Roi' Delibes: Selections from 'Coppelia' Luigini: Egyptian Ballet, Part 1 (allegro ma non troppo) Schäfer: From 'Interludes' op. 17: No. 2 Andante sostenuto No. 3 Allegro vivace Debussy: Clair de lune, from Suite Bergamasque Sibelius: Finlandia op. 26 Dvorák: Largo from Symphony no. 9 ('From the New World') Kreisler: Selection from 'The King Steps Out' Piet van Egmond: Improvisation Sims: Shoutin' 'Glory!' Gershwin: Rhapsody in Blue